When I first began my work at Integrationswerkstatt I was concerned that the work I would be doing in this small organization was not going to have a major impact. Before moving to Germany for my internship I had imagined a thrilling work abroad experience. Instead, I found myself in a small remote retirement town in the suburbs. My impression was that any work I could do would only have immediate impact on the local community and that real integration needs to be grander and more inclusive.

I could not have been more wrong. Every refugee I have met so far, no matter how old, expressed their need for security and stability. They all expressed a longing to feel that they belong to a community. I realized the smallest initiatives that aim at bringing people together and creating common ground are very important.

Many refugees expressed that language barriers have deterred them from being fully involved socially and professionally. In Germany, in order to start working, refugees have to go through a series of German courses on different levels, which then open up the doors for them to apply for work. They need to become fluent in a short manner of time to be eligible for work. So even things that seemed pointless to me, like a cafe gathering every once in a while, allowed refugees a rare opportunity to practice their language skills and understand the nuances of society. 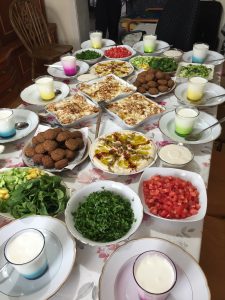 However, there are also many frustrations when it comes to planning and organizing small-scale community-focused work. One of the refugees who I met with was a successful lawyer in Syria but cannot practice law anymore or pursue a degree because of the language barrier. He explained to me that he has to now think of other work alternatives and finds that a small business is the only viable solution for economic independence. He says he would be content if he could open a small restaurant that serves Middle Eastern food, which would allow him to finally be able to get off of government aid (indeed, he makes great falafel). Unfortunately Integrationswerkstatt does not have the proper funding to support refugee business.

Some of the work can be frustrating due to lack of funds, but it also allows for creativity and resourcefulness for that same reason. I found that a lot of the work that we do was based on what we thought the refugees needed rather than what they actually need. I decided to conduct a series of interviews to allow refugees to share their stories and make clear what their true needs are. This has allowed me to put my knowledge of Arabic to use, and I felt that refugees felt comfortable speaking in Arabic.

I have come to realize that the smallest gestures can lead to real change if we have enough patience to witness it. It takes time for a society to become fully integrated and it takes time for people to change misconceptions and free themselves from stereotypes, but it is possible!