I’m lucky enough to have an internship that makes it easy to get out of bed each morning. Walking through the streets of New York, $2 coffee from a local coffee shop in hand, I am always excited to see the new opportunities each day has in store at the U.S. Mission to the UN (USUN).

In the Research Unit, I have enhanced my investigative research skills by assisting with research requests. During my time at USUN, I have taken classes at the UN Dag Hammarskjold Library on Security Council and General Assembly documentation, which have helped me better understand the UN system, as well as how to use UN databases in order to find information. If you’re curious to learn more or would like to engage in your own research using official UN documents, links to these databases can be found here (ODS) and here (UNBISNET).

Additionally, I help in management of Freedom of Information Act (FOIA) requests, after a recent surge of requests since fall of 2017. Tasks range from assisting in finding information requested within the Research Unit’s records to management of documents. I also assist with a records management project in order to properly archive official USUN documents.

In the Host Country Affairs Section, I organize notifications to Permanent Missions to the UN, and their respective responses to a project to confirm the official status of members of their households in the United States. I distribute to members of the United Nations community the return of their national passports when U.S. visas have been issued as well as Department of State Diplomatic and official identification credentials. This past week I attended a meeting of the Committee on Relations with the Host Country in which I observed how the United States administers its responsibilities as the host country for 192 member states.

Additionally, I have been able to sit in on meetings during the UN’s High Level Political Forum (HLPF) on Sustainable Development, and write short readouts about the events and panels I attend. Click here for more information about HLPF.

Through these experiences and tasks, I have gained vital information on how political reform is executed on a global level. I have begun to understand the complexities of multilateral negotiations at an international institution, and the difficulty of implementing change. This knowledge has opened my mind to the abundant number of career paths I could pursue after I graduate, and I am excited to see what the future holds. 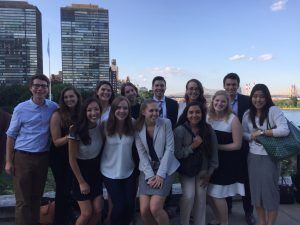 I am also extremely grateful to be in New York City this summer, as I have  explored many new parts of the city and met people from all over the world. For the 4th of July, the U.S. Mission hosted a party at the UN, which I attended and viewed the Macy’s 4th of July fireworks from the best seat in the city, accompanied by the U.S. Ambassador to the UN Nikki Haley. I have also explored many historic and cultural parts of the city, and with every new item I check off my “list of things to do in NYC,” many more are immediately added to the list. I have  met many interns who are interested in pursuing similar career paths as I am and have been able to learn from their experiences,  as well. I am looking forward to seeing what the rest of the summer has in store!