In my first semester of sophomore year at Brandeis I took the course Global Pandemics: History, Society, and Policy. This class, while teaching me much about the horrifying diseases and plagues around the world, also gave me a stronger take away: to always think about the different perspectives of any issue. When talking about global health, we often take a global perspective with organizations such as the World Health Organization (WHO) or the World Bank. Furthermore, “best practices” lead the way when determining what actions to take on an issue. However, we must learn to also consider cultural, economic, social, spiritual, and geographical factors when looking at issues. I also learned to ask who has the power to enact change versus who should have that power.

Applied to my internship, I realized that environmental issues need a global perspective in order to address the fact that climate change is real. But sadly, there are deniers all around the world, usually with special interests in mind such as selling oil and coal. Environmental justice also needs more fine-tuned, local perspectives. The class Global Pandemics helped me realize that the biggest actions unfortunately ultimately come from the system which holds the power and money, but progressive change starts with the people’s voice. The Sierra Club is advocating for marginalized groups affected by the destructive actions of special interest groups. 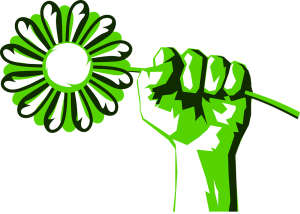 These concepts strongly resonated with me when I got the opportunity to attend an American Federation of Labor and Congress of Industrial Organizations (AFL-CIO) meeting in downtown Austin with the Sierra Club communications director. The meeting topic was centered around protecting the power of local democracies, and how the term “preemption” has changed connotations over the years. What once was the state fighting federal government power (such as in states legalizing medical marijuana or raising the minimum wage) has turned into state governments overstepping bounds on municipal governments.

Local elected officials know the needs of their community better than any other level of government representation. Local governments put in place policies that will benefit their people and local businesses such as increasing paid time off, ensuring equal pay for women, or turning their area into a sanctuary city. State governments recently have been trying to strip municipal governments of these powers, which is effectively destroying the power of not just local officials but also the people.

Democracy itself is being threatened by a tiered power structure. This leads to obvious social justice implications and effects on local communities not being protected by the leaders who know them best, because instead state officials will often make policy decisions based with corporate interest groups in mind since that is where the money is located, and unfortunately in America money too often equates to power. We must learn to listen to the people’s voices, or else we will begin to lose sight of the principles on which this country was founded.