Skip to content
I have learned a myriad of skills at my position this summer. Most of these skills are technical skills which are useful in the realm of public health policy. One specific subset of skills that I know I will be utilizing elsewhere is the different methods of organizing and displaying vast quantities of qualitative data.
At Brandeis, I learned how to analyze data is a quick, simple and categorical way. If one question had to be answered, perform this function and you will arrive at the answer. If you wish to convey something else, then this other function will do the trick. If other parameters exist, create new models and test them again. However, in the work I am doing at the CUNY Urban Food Policy Institute, this is not enough. I have to engage with the data in a different way. Often, the data I use needs to not only be analyzed but also presented in a way that is understandable to the general public. It is not enough for me to know that a certain average means something, but the data has to show this in a graph or chart that other people can understand. While at the beginning I thought I understood how to do this, I learned so much more throughout this experience. More specifically, I began to realize that non-numerical data is hard to show. It can not be summarized easily and it must be clear and concise enough for the average person to understand it. This became especially apparent to me through one specific project I was asked to do.
A project I am working on right now aims to organize and categorize food policies in five boroughs by government entities. While the research aspect of this was difficult, I have struggled more with how to organize the over 500 entries we have acquired. Working with my boss, we brainstormed a few ways that this could become an interactive and visually appealing database. We finally settled on using a google software called Mindmup. MindMup makes use of a mapping tool called “mind maps” which organize data as “nodes” or offshoots of other data points. This program has allowed us to begin compiling and creating an NYC database of food policies that will eventually be accessible everywhere. 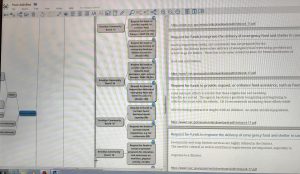 Before settling on MindMup, I learned about other ways to organize information that I can hopefully put to use in the future. This sort of skill set will be useful in every policy related job as compiling large amounts of information for public consumption is often necessary.
This experience also taught me how adaptable I can be. I started creating our database using a different program that I found to not be conducive to what I wanted to do. I was able to walk back to my boss’s office, explain to him the problems and troubleshoot with him and ultimately choose a new format. I repeated this multiple times and settling on MindMup became both exciting and rewarding. Learning this about myself is useful and I will definitely use my adaptability as a tool in future endeavors.