What have I learned about social justice work?

Activism is the keystone of social justice work, but there are so many layers to being a good activist. You have to be patient. You have to be open-minded, motivated, hard-working, sociable, emphatic, and organized. You have to be good at communicating. These are the characteristics I knew I had to have to be a good activist before I started working at Interfaith Worker Justice. I did not, however, have the chance to see if I had them and if not, work on them before.

Sarah, my supervisor, thinks that there are a few skills and qualifications that are important for this job: ability to motivate and persuade people, particularly people of faith to join the fight for worker justice and motivational speaking skills.

I saw my capacity to be a good activist at Interfaith Worker Justice. I acknowledged my weaknesses and strengths.

I acknowledged the power of religion in mobilizing people. I saw the option of having religion and religious people in the action space and the conversations. I saw how significant religion and its message could be.

What kind of impact did I have on IWJ in the time I have been there?

At IWJ, I constantly engaged in conversations about activism with my colleagues and my supervisor. What I believe I added to the conversation is the experience I had in Turkey. Pointing out the differences between the two practices and explaining how and why activism is the way it is now in Turkey was what I brought to the table at IWJ.

This I believe was also important to show and highlight the peculiarity of  practices in the action space in the United States–almost like a reminder to the people with whom I engaged in conversation.

What do I know now that I wished I had known when I started?

I wish I had known how difficult it would be to travel in Boston using public transportation. I wish I planned better and payed less to UberJ

Boston’s public transportation is neither fast nor easy to manage but planning ahead of time would definitely help.

What advice would I give to someone else who wants to pursue an internship or career in my organization or field?

It will sound cliché but learning and getting the most out of IWJ is up to the person who is working. IWJ provides you with opportunities and it is up to you to get something out of it. My suggestion for the next intern would be solely “do and learn as much as you can!” Educate yourself, go to talk to people, ask questions, read and think about the power dynamics!

On top of preparing intellectually, I would recommend preparing mentally and physically. Be ready not to have a fixed schedule. Be aware that you will not be able to make spontaneous plans. Keep in mind that you will travel a lot to go to meetings and congregations. Thus, organize and schedule your time wisely. Prioritize your health. Know that IWJ prioritizes its workers health. 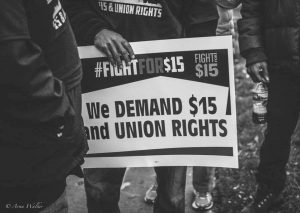