The Restore Justice Foundation is a nonprofit based in Chicago that works to promote criminal justice reform within the Illinois Department of Corrections. I found this organization through my mentor that I was connected with through the Brandeis Athletics Mentorship Program. After doing research on the organization, I decided that its mission was something that I am passionate about and I want to pursue further. The Foundation is committed to ending inhumane and unconstitutional practices in all facets of the criminal justice system, working on issues from sentencing reform to prison conditions to re-entry policy. The organization hosts events in the community such as advocacy trainings, prison visits, and lobbying days at the state legislature. It also meets with legislators in session and works on getting bills passed into law in order to help reform the criminal justice system in Illinois.

Their most recent accomplishment was getting HB531 passed in the last session. That bill, which is now law in Illinois, outlawed juvenile life sentences without the possibility of parole, which had been the case since 1978. HB531, which is now Public Act 100-1182, allows individuals seeking review the right to an attorney and the Prisoner Review Board. This bill had been worked on by Restore Justice for the past six years, and was passed right as I began working for the organization.

Restore Justice Illinois does most of its policy work while the state legislature is in session, so while the summer is not necessarily pushing policy work, it is a time for the organization to do important work in preparing for the issues we want to push during the next session. One of my biggest jobs for the summer is to work on restructuring our website. I am working with our new communications hire on restructuring the website, as well as creating new content for it. Our hope is to be able to create more resources for the public to be able to come to our site and learn about the background of the issues we have chosen to pursue as well as more about the structure of the Illinois prison system. I want to bring the skills I have learned at school in terms of research, writing academic work, and my passion for these issues to help the organization create a space for the public to learn about the fight we are engaging in, and hopefully draw support (both in sentiment and in monetary donations) to keep doing the work we are doing and to be able to expand our reach. 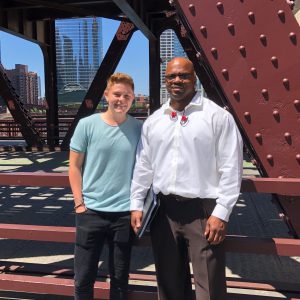 I am one of three interns we have working currently. I started at almost exactly the same time as Wendell Robinson, who is at the organization doing a 14-week apprenticeship in order to figure out if he wants to pursue this field as a career. His focus is on fundraising and financial support for the organization. As a nonprofit, we rely on donors to help us have the resources for the work that we do. The picture is of him and I and was featured in the monthly newsletter for the organization. Overall, I love the organization and the people I am working with and I am excited to learn and grow in my skillset and my activism over the rest of the summer.