I’m about halfway through my internship at the State Department’s Bureau of Near Eastern Affairs (NEA), and I have enjoyed it immensely so far. While the Office of Regional and Multilateral Affairs unfortunately has no windows, my colleagues and the interesting information that I am constantly learning about makes up for the lack of sunlight. I have been lucky to work closely with two of our office’s staff who previously did internships with the State Department. From their own experiences, they know how valuable it is for me to work on substantive content and have assigned me projects that have allowed me to better understand issues like women’s empowerment programs in the Middle East and North Africa (MENA) region and the relationship between NEA and Congress. Unlike when I’m at Brandeis and have a set schedule with classes predetermined at the beginning of the year, my projects differ more frequently at my internship, and I have the opportunity to further research and explore interesting topics as I learn about them.

In general, working at the Harry S. Truman (HST) building, which is also known as the main State Department building, has allowed me to have access to additional interesting opportunities. Conferences that are held at HST are easy for interns to slip into. One example of this was when I had some free time in my schedule, and I was able to sit in on a panel discussing space initiatives around the world. This coming week, the Ministerial to Advance Religious Freedom will be occurring. I will be volunteering as a control officer, which means that I am assigned to escort a distinguished guest wh 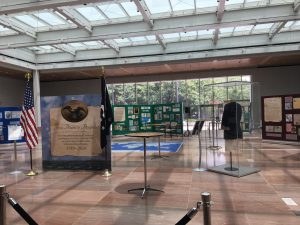 o was invited to attend and speak to a panel about her experiences as a survivor of religious persecution. I look forward to this responsibility as much as I look forward to the panels that I will be able to sit in on promoting religious freedom that will be occurring throughout the three-day event. When panels are not happening, there is still so much to see and do throughout HST. In one corner of the building, there is the Hillary Rodham Clinton Pavilion, which currently has an exhibit on consular and diplomatic work throughout the world.

So far, I have had the opportunity to develop my technical writing skills by writing summaries of events I’ve attended, congressional briefings, and reports from the embassies and consulates throughout the region. While the skills necessary for writing academic, lengthy papers are valuable, it seems that concise summaries will be more useful if this is the line of work that I ultimately end up in. Another skill that I have developed and during the first half of my internship is an appreciation for attention to extreme detail. When preparing documents for the senior leadership of NEA, I have developed the habit of double checking the amount of spaces and the formatting of each aspect of the document to ensure that the highest quality document has my name on it at the end of the day. I will continue improving  on this transferable skill, making sure that each document look appropriately uniform and organized.

Disclaimer: The views expressed here are my own and not necessarily those of the U.S. Government.