There are a few things in life that are truly black and white. Recently, a lot of issues surrounding racial identities have stirred the pot in terms of political affairs and the idea of what constitutes racism has dominated headlines. Growing up, I used to think racism and racists could be easily defined. It was simply good or bad, and anything that was racist would immediately be called out or challenged. It was part of the charm of living in an era with advanced technology and educational opportunities. It is unclear when I started to muddle the line between what is racism and what isn’t and began to see how prevalent it truly is in our society today.  Before my time at Project Healthcare, the process of delivering and receiving healthcare was much simpler for me. The last ten weeks have presented some of the most rewarding, challenging, and personally gratifying learning experiences that have completely changed my perspective on healthcare and how health is determined.

Humans have a desire to have clearly defined boundaries and place things under categories. It is this same desire that lets us feed into the system that chooses to use our differences against us rather than embracing them. We set ourselves up to have implicit biases that inform our interactions with different people. Being aware of the biases we all hold is especially important for people working in health-related professions.

To say that race could mean the difference between life or death is not an exaggeration. Because of systemic factors such as residential segregation, and past and present policies, members of ethnic minorities are at a higher risk of chronic health conditions. These same groups are less likely to receive the same level of preventive or equitable care as their white counterparts. Before this summer, these facts were just statistics. It was difficult for me to imagine how this could be true. Spending hours observing provider-patient interaction in the Emergency Department has made me realize how racism still persists in our system, even though everyone I have spoken to wants to see the opposite.

One of the biggest barriers to remedying the issues of race in our healthcare is a lack of concession in a healthcare setting. In the words of Dr. Kamini Doobay, a physician in Bellevue’s ED and a board member on NYC Coalition to Dismantle Racism, “We can’t attack something without acknowledging it. By not acknowledging the issue, we are perpetuating it”. Racism is a difficult and uncomfortable topic. Even saying the “R-word” makes people uneasy. We avoid holding each other accountable by not talking about racism;  instead thinking avoiding the issue helps solve it.

Working with one of the most diverse patient populations in the state, it can be difficult to maintain a conscious level of cultural sensitivity for every individual. The healthcare providers I worked with this summer were some of the most empathetic and softhearted individuals I have ever met, yet many of them exercised unconscious changes in their stature and conversation that differed the treatment of patients of color versus white patients, which certainly had an impact on the quality of care individual patients received.  A lot of patients who came into the ED held strongly negative preconceived notions of the doctors that were treating them because of either previous experiences with healthcare providers, or the notion that their doctor is white so only prefers white patients. A common theme throughout the entirety of my summer was a desire for patients to see more providers of color. While changing the representative demographic of current and potentially future healthcare providers is an issue for the larger larger health system to deal with, taking the small effort to build bridges with patients of color and exercise cultural sensitivity will be extremely beneficial at the individual provider-patient interaction. 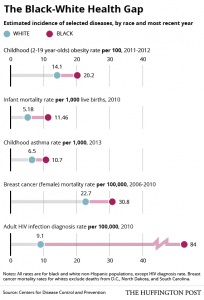 Without a stethoscope around my neck or a white coat on, I appeared to be removed from the system that perpetuates racism, unknowingly or not. Patients felt comfortable telling me things they wouldn’t share with their doctor or nurse that were absolutely important for their overall well-being. Nearing the end of this experience, I am having a difficult time reconciling the idea that earning the qualifications necessary to help people with their health issues could change the perception of me as a person who genuinely cares about a patients well-being into an untrustworthy figure, even though the latter is false.

Project Healthcare has given me countless memories and experiences to reflect on. From seeing brain surgery on my first day to the inside of a lung, my fondest memories are those spent speaking with patients and hearing their life experiences. Having the opportunity to interact with people from all walks of life is an incredible one, and something that I encourage every individual to seek out. Working with the other Project Healthcare interns as well as the providers in the Emergency Department, I am confident our small acts to combat racism in healthcare will not prove to be futile. A future with equitable healthcare is absolutely possible, but requires that all participants are actively holding each other accountable to create tangible change. 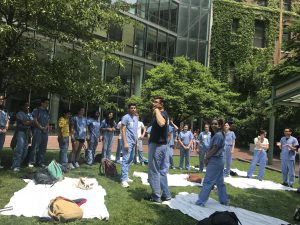 Project Healthcare interns bonding and getting some sun after a lunchtime picnic.