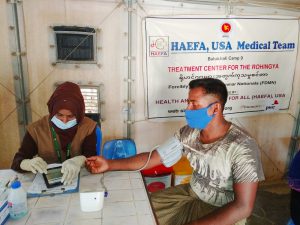 Health and Education for All (HAEFA) is a United States-based nonprofit organization that provides on-the-ground healthcare for Rohingya refugees, as well as other disadvantaged populations in Bangladesh. Access to adequate healthcare should be a basic human right. However, it is oftentimes treated as a privilege in many parts of the world. Healthcare is nearly nonexistent in remote areas of Bangladesh. HAEFA’s goal is to address this injustice and establish clinics and mobile health centers in places that lack such services in Bangladesh.

So far, it has successfully treated thousands of Rohingya refugees in Cox’s Bazar, which is a district in Bangladesh. Additionally, one of the leading causes of death among women in Bangladesh is cervical cancer. Previous government programs to address this issue did not make a large impact. HAEFA developed a screening program that reached people in remote areas by digitizing the process of cervical cancer screening. While the government program was screening 30-40 patients per month, HAEFA’s program was able to screen 100-150 patients per day. Innovative programs such as this are at the forefront of HAEFA’s goals to provide healthcare to disadvantaged populations.

My role at HAEFA this summer is to tell HAEFA’s story and share all the important work they are doing with the world. I am the team lead for the Media Team, which means that I oversee and delegate tasks that have to do with the monthly newsletter, social media posts, and website maintenance. I personally work on the monthly newsletter and am about to begin a complete overhaul of the website alongside other team members. I am also part of the Intern Research Team at HAEFA.

The aforementioned cervical cancer screening program has been uniquely successful, despite initial skepticism from the international medical community. Dr. Abid, the founder of HAEFA, has asked our team to delve into the story behind this program and write an academic research paper about its success story so that others can model similar programs with ours. He hopes to have this paper published sometime this year. By keeping people updated about HAEFA’s work, I hope that my work will allow the organization to continue doing great work via donations and other forms of support. I believe that small steps, such as making social media posts about HAEFA’s activities, can lead to big steps such as the possibility of creating new programs with funding that can be collected as a result of raising awareness about the issues HAEFA is trying to alleviate.

Since its inception in 2013,HAEFA has provided healthcare services to thousands of patients in Bangladesh. Its ability to adapt to different circumstances, such as the Rohingya refugee crisis of 2016, is what makes HAEFA a reputable organization. To me, progress means being able to adapt to new challenges and strategize to solve problems as they arise. HAEFA’s ability to shift its focus to the Rohingya crisis was a huge factor in its success as an organization. While the refugees receive services from HAEFA, it also has continued its work with Bangladeshi garment workers. Additionally, it has created a COVID-19 training program for physicians to be better equipped to handle the challenges of the pandemic.