As a second-generation Mexican-American, I have heard stories from family members about their journeys immigrating to the United States. This inspired me to delve into immigrant advocacy and learn about the American immigration system. I began pursuing this interest with the Right to Immigration Institute (TRII), an organization that seeks to provide legal aid to Greater Boston area immigrants. Throughout my work with TRII, I have learned about immigration processes and the history behind the system. After graduating from TRII’s intensive legal training program in Spring 2022, I realized that I wanted to experience working at a law firm to potentially pursue a career in immigration law.

My immigration background brought me to my current role as a legal intern with the Law Office of Saikon Gbehan. I was drawn here due to Attorney Gbehan’s dedication to being a “zealous advocate” for her clients, a Brandeisian principle of jurisprudence. From my interview with her, she relayed to me how she zealously advocates for clients, overwhelming judges with insurmountable evidence of eligibility for the clients in pursuit of various processes. The concept of a zealous advocate resonated with me, as I feel that it is the job of a lawyer to stand up for their client in the face of institutions that must attend to the needs of individuals in society. By implementing this legal style in immigration firms, it serves to challenge unjust institutions and center the client, which is a main goal for me.

In my role, I assist Attorney Gbehan primarily in immigration matters for her client, which includes but is not limited to: researching current immigration statutes and case law to incorporate in matters of asylum, family-based petitions, and adjustments of legal status; drafting research memos and contacting representatives of United States Citizenship and Immigration Services (USCIS) to inform clients of their prospective immigration opportunities to the United States; and meeting with clients to gather supporting evidence for their case and work on their applications.

In my time so far, I have primarily worked on family-based immigration petitions for individuals who are receiving legal permanent resident (LPR) status—commonly known as a green card holder—via a relationship with a U.S. citizen or permanent resident, through blood or marriage, for example. In addition to other forms, the primary application for this procedure is called the I-130, Petition for Alien Relative. 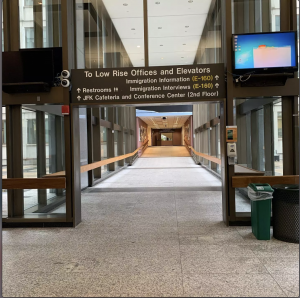 I believe that knowledge is power, and I am intentional about informing clients of their options and why the law functions the way it does. By putting information back into the hands of clients, it gives them the power to have a greater role in determining the outcome of whatever immigration matter they are involved in. In my work at the firm, I hope to create a ripple effect in which knowledge is disseminated among immigrant communities. In this ripple effect, I would hope that it leads to a more systemic reformation and change of the current immigration system by putting power back into the backbone of American society.