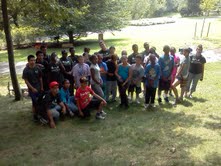 I have just completed my first week as a youth development intern at the Roxbury Tenants of Harvard. On my first day my supervisor took me on a tour of the Mission Hill property and explained to me how their organization is run. We also discussed his background in Non- Profit work and the skills one needs to acquire in order to hold a senior/executive position.

One of my personal objectives for my summer internship was learning about the business aspects of Non-Profits. I’m interested in social services as well as business. This is why I thought it would be beneficial to get some hands on experience at a Non-Profit organization this summer. My supervisor has agreed to go over the budget with me, as well as allow me to sit in on staff meetings so I can see how executive decisions are made. I feel incredibly fortunate to be working with someone who is invested in my experience and wants me to get everything I possibly can during my time here.  He told me he would share all he knew with me, and he has been keeping his word. Every morning I report to him and check in, he asks me questions and makes sure I have help completing the necessary objectives for the day.

I work directly with two youth development staff during the day in the Teen Department. I’m also finding that it isn’t difficult to connect with the youth, I’ve kept the conversation generally casual and I think they appreciate that. I don’t crowd them but let them come to me instead, and I’ve found that this is a effective way to connect with most of them. The girls seem so much more shy than the boys, so I’ve gone a little out of my way so that everyone knows I’m available to them, while still being approachable. I’m so happy that things have been going as smoothly as they have, and that the staff as well as the youth have welcomed me into their space. Looking forward to all the good things to come over the summer!and we’ve been creating an agenda for the summer. So far, we’ve scheduled field trips, basketball tournaments, job readiness workshops, and fun activities for the kids to do during the day. I’ve met quite a bit of the youth I’ll be working with throughout the summer and I was surprised to see how quickly they have warmed up to me. The kids in the program (youth building communities) are between the ages of 11 and 14, so this is a critical age for them. I’m very much looking forward to working with them over the summer and building relationships. At first I was a little concerned about the relatively small age difference between the kids in the program and myself. I’m sure to them I seem young, and sometimes teenagers can see this as a reason to see me as one of their peers. Thankfully though, the staff has introduced me to the youth as well as their parents as part of the staff so I haven’t had any issues with my authority thus far.

I’m also finding that it isn’t difficult to connect with the youth, I’ve kept the conversation generally casual and I think they appreciate that. I don’t crowd them but let them come to me instead, and I’ve found that this is a effective way to connect with most of them. The girls seem so much more shy than the boys, so I’ve gone a little out of my way so that everyone knows I’m available to them, while still being approachable. I’m so happy that things have been going as smoothly as they have, and that the staff as well as the youth have welcomed me into their space. Looking forward to all the summer has to offer.