Like every dazzling production, mine has finally come to its close. In a few weeks, the curtains will be drawn, the lights dimmed, and I will be onto my next premiere. Yet, all the knowledge that this tale has taught me will live on in every show I do.

If I could extend my run with Speakeasy Stage Company as their Production Management Intern, I most certainly would. They have exceeded my expectations in their support of my theatrical education. Not only have I learned everything, and more, I wanted to in technical theatre, but my eyes have been opened to the office setting of a theatre and all that is required as an administrator. I am grateful for all the theatre professionals I have met and the doors they have opened for me in my career path. This internship has solidified my already established belief that I am meant to be a theatre artist and have the growing abilities to succeed as such.

While I am saddened to leave Speakeasy and return to Brandeis, I am comforted by the awareness that my work as an intern will continue to influence the company after I am gone. When I could, I wrote guides for future interns so they would more easily understand tasks they were given. I created timelines, spreadsheets, and checklists galore for this coming season’s shows. Every week, I read and analyzed two plays which were then voted on as possible future productions. (And let me tell you, there are some fantastic new works coming!) An intern’s work has value, even if on the surface they seem to be the lowest on the totem pole. Speakeasy’s staff is well aware of their interns’ work. One staff meeting, they surprised us with cupcakes- complete with headshots of each intern.

It was nice to be recognized by Brandeis for my hard work, too! Kristin and Jackie from Hiatt stopped by Speakeasy’s office one morning to meet my supervisors -both of whom are wonderful teachers – and speak to me about my experience. If you want to hear more about working in a professional theatre, you can check out the video interview here .

Whatever area of theatre you are interested in, it is important to understand as many other jobs within the stage as you can. Not only does this establish an appreciation for those around you, all of whom are working together to put on a show, but it also creates more job opportunities for yourself in theatre. The world of performance is an incredibly competitive field so the more you can do within that field, the more chances of success you will be given. However, success doesn’t just come from knowing how to complete a job. Everyone appreciates a positive attitude and strong work ethic. If you and your competitor can both do the same job equally well, the company will choose the harder working, more positive applicant, especially if they already know them. Get to know as many people as possible and help them out. The show will always go on, but it is your choice whether you give yourself the best chance to be included.

I will never forget the kindness and generosity of the people I have met at Speakeasy. Everyone was always willing to explain something new to me, seemingly knowing that they were once in my shoes. I know that Speakeasy’s show will go on and am grateful to have been a part of it- even if for one sweltering hot summer.

If you want to see upcoming Speakeasy shows, click here!

In order to make it in the world of showbiz, one must “Give ‘em the old razzle dazzle”, as Billy Flynn says in the musical Chicago. No matter if you’re under the lights or behind the curtains, it is important to always provide your best work- even when you have little to work with. As the Production Management Intern at Speakeasy Stage Company, this summer I have indeed learned to both “razzle” and “dazzle”.

Though I have had experience in onstage and backstage work prior to this summer, these past few months have opened my eyes to the world of theater administration -a fundamental sequin of razzling and dazzling audiences that many forget to acknowledge. I have learned how to complete weekly finance reports, write journal entries for box office revenue, and comprehend 990s. My advisor blew my mind when he introduced me to ‘Quickbooks’, a computer program that houses all the financial information of a company who chooses to use it. (You would not believe the millions of numbers, codes, and breakdowns of every dollar spent.) I even set up sound equipment and new desktops complete with essential software programs for the office, something I never expected to do while working in theater.

Theater administrators are often tasked with as many jobs as what multiple employees would be hired to do at a non-art company. While theater employees love and value the work they do, they are also well aware that they must make every dollar count because there is not an ounce of sparkle to spare. This being said, it is important to know your worth as an employee- something I learned at Speakeasy’s weekly ‘How to Get Hired’ seminars for interns. As an intern, one should always be on the lookout for new tasks to learn because doing such demonstrates your hard work ethic. However, as an employee, one should be aware of his/her/their compensation in relation to the jobs they are hired to do. If a company is asking for more than what they are paying, the job may not be a good fit. This is something I was aware of in the workplace, but never related to the theater scene. I always assumed to do as much work as possible because theater jobs are hard to come by.

Lucky for production interns, not every day is spent in the office. I got to participate in striking a set from a past production. I learned how to take down stage lights, something that was on my list to learn for the summer. A ‘color blast’ is a rectangular light that literally blasts the stage with color. In contrast, a ‘leko’, also known as a ‘Source 4’, provides directed light. Learning the lingo is certainly beneficial when demonstrating your worth as an intern. I also had to breakdown the platforms of which the audience’s seats are placed because we had to set the theater in a new configuration for the next production. Working alongside me for the day was a man who also works as a sound designer. Throughout the day he described various tasks he does in sound and offered to show me equipment on the next show he would work on. The more outgoing and helpful you are, the more people you will meet who will be all the more willing to help you!

I was also invited to sit in on the first creative meeting for our upcoming production, Choir Boy. (It was on Broadway this past season!) The director explained the role of the audience, the set designer brainstormed transitions between scenes and production management considered what type of choreographer to hire- all of which were essential to putting on that razzle dazzle. I was mesmerized listening to everyone on the creative team discussing the vision of the show. A couple days later, the marketing department asked for extra hands in setting up equipment for an interview with the director. I have knowledge on how to do that since my dad is a photographer, so I pitched in. Because I helped in a department other than my own, I was asked if I’d like to learn about filming/photo editing software! (Another activity to check off on my bucket list!)

The harder you work to help a company shine, the more opportunities they will give you to do so. After all, if you can’t razzle and dazzle yourself, how can you expect others to do the same? 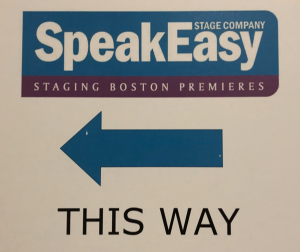