My learning goals have definitely changed a bit since first establishing them before my internship. For example, I came to understand and value the importance of doing a wide range of jobs in my internship – whether it be picking up food for a meeting, note taking, or attending a conference. I realized that rather than choosing one specific type of job or focus area, I preferred and would find more value in taking on anything that came my way. I would say I definitely ended up reaching this goal; one co-worker noted that they appreciated my offering to help out with “whatever, whenever.” I have definitely run into information and experiences that have challenged my beliefs, and come to a better understanding of some of the ideological sacrifices one may choose to make (or choose not to make) in working under the guise of a larger organization, or in my case, the government of the United States.

My career interests have certainly shifted. For example, after hearing about the life that Foreign Service Officers in the State Department commit to (moving to a different post every 3 years, sometimes with little choice), I decided that may not be the best option for me. Other opportunities, such as working for other government agencies or in a Civil Service posting in the Department of State seem more like opportunities I’d like to pursue. I still remain uncertain about my career interests, though; the choice still remains between a domestic-focused career and more of an international-focused career, and I hope to clarify these interests in the future.

Over the course of the internship, I’ve come to enjoy the day-to-day interactions with those around me. Whether it be chatting over coffee, a quick work question, or just catching up, these interactions were so important for building valuable connections.

If I could give one piece of advice to someone looking to intern for the Department of State (or more specifically, the U.S. Mission to the UN), it would be that it’s helpful to know what you want. While I certainly got by with my “whatever, whenever” preference, I think it could be really helpful to have a specific area (whether it be a specific type of policy, geographic region, or otherwise) that you “specialize” in. The State Department is structured in a way that those who have a specific focus can really excel in what they do.

One piece of information that I think is important to those going into international diplomacy-focused fields is that small wins and compromises can go a long way. When you show a partner (or enemy) that you’re willing to work with them, they can and will value and trust you. This may lead to specific policy outcomes that are more beneficial to your positions.

This summer, I’m most proud that I got to experience global events on the micro-level. Whether it was note taking for a Security Council meeting on Ukraine or drafting a recommendation for a meeting, I had the opportunity to see and interact with these events, and U.S. policy related to them, up close. I may be mistaken, but I think it’s generally rare to have an internship that gives such up-close access to matters of high importance. I’m proud that I was able to witness these events on a near-daily basis, and that I could always do work that carried meaning and importance.

(The views expressed in this blog post are solely the views and opinions of the individual, and in no way shape or form represent the United States, Department of State, or any other government body or agency)

My internship has turned out to be so much more than I expected. Before the internship began, I did not fully grasp the impact my work would have. Sure, the internship sounded cool, but I did not realize that my work was integral to the organization I would be a part of. In nearly two months of work, I’ve come to value the feeling of importance and purpose that I’ve found in my day-to-day work.

The UN has generated much skepticism about its effectiveness in recent years. I’ve seen that firsthand in its inability to take concrete actions to stop Russia’s full-scale and brutal, illegal invasion of Ukraine and Russia’s recent Security Council veto to block the implementation of sanctions on North Korea (DPRK). These examples are frustrating; it’s natural to feel that something may be wrong with the institution as a whole. I’ve certainly noticed those thoughts popping into my head over the past few weeks. Yet, I would argue that, despite the validity of those perspectives, they are deceptive. There exist a multitude of conflicts, crises, missions, and problems around the world. The UN allows the possibility of those problems to be addressed in ways that would be impossible if its existence were to falter.

In a similar vein, some in U.S. politics question the United States’ participation in such bodies that at times appear to be ineffective. Yet I have learnt over the course of my internship that there are so many fronts that the United States has the opportunity to influence in multilateral diplomacy. To simply refuse to participate in crucial relationship-building forums and discussions, we forfeit those forums to the very countries who we may view as destructive or misaligned with our views.

Interestingly, my experience in international diplomacy has led me back to one of the bedrocks of American democracy: the first amendment. I’ve found that this important institution, which enshrines our right to speak our minds, is connected to our engagements in the global arena. To remain quiet, to disengage, to sit back, would do us more harm than good. As always, when we engage in dialogue, we are given the opportunity to leave our mark on the issues we may hold dear to our hearts. The same goes for multilateral engagement and international diplomacy, especially at the UN. I’ve sat in on meetings where this value has clearly been demonstrated, whether it be in private negotiations or a public statement broadcast for the world to see. We must stand up for our values, whether it be at school, at the UN, or elsewhere.

In my time at USUN, I’ve come to appreciate the value of working on a team. This important skill set is transferable; in nearly no professional job will one be alone and independent. Whether I continue in the field of public service or shift to the private sector, this ability will be an asset. Another skill I’ve developed is being able to condense large amounts of information into digestible chunks that can be passed on to others, and I anticipate this too to be important for my career. I even anticipate this to assist myself in class at Brandeis in taking notes and processing information.

This summer, I am interning through the U.S. Department of State at the U.S. Mission to the United Nations in New York City (USUN-NY). I’m interning in the political section of the Mission, which is responsible for supporting the U.S. Permanent Representative and other ambassadors in advancing U.S. policy at the UN. There are several other interns in my section, and we all work to support the Foreign Service and Civil Service Officers who primarily make up the political section. The work varies from providing escorts for visiting guests to attending meetings to crafting briefing materials, all of which are important in their own way. 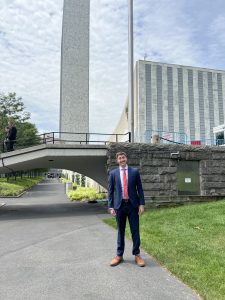 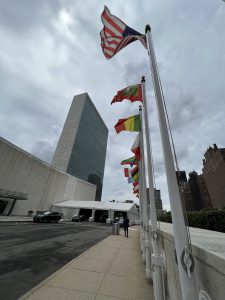 Although I cannot give specific details on my work and experiences thus far due to strict security clearance requirements, the work has been insightful and engaging. Even just note taking for a given meeting has its own importance. It’s easy to see the “final products” of U.S. foreign policy, but it’s extremely informative to get a first-hand look at the crafting of said policies. I am proud to work in an office where the work of all individuals is truly vital to the organization’s success, which is something that cannot be said for all workplaces. As such, I am lucky to have the benefit of feeling the immense importance of my work for my organization, but also for the broader global community. 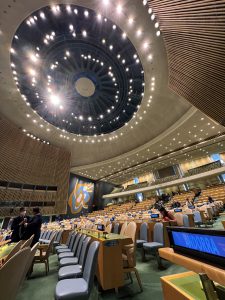 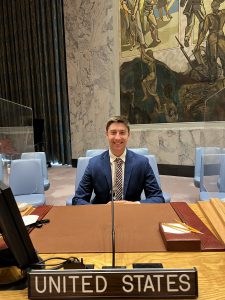 This summer, I set out to tackle a number of goals that will allow me to grow both personally and professionally. Academically, I hope to learn more about how USUN-NY balances the United States’ own interests with the importance of being a global leader. After just a month of work, I’ve already had significant exposure to the important bilateral and multilateral relationships that allow the U.S. to effectively participate in the global community. Career-wise, one major goal of mine is to utilize my experiences to build important personal connections with individuals who work in my field professionally. Additionally, I’ll be using my internship to determine whether a potential career in the State Department is best for me. Personally, I hope to encounter information, individuals, and experiences that challenge my own personal ideas and beliefs. This is one of the only true ways to grow, and I have (and inevitably will) encounter challenges through working for a diverse organization made up of many individuals. 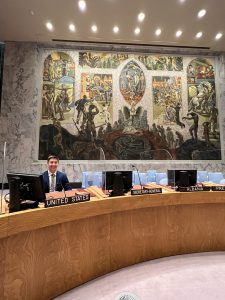 In just one month of work, I feel that I’ve already gained insights into international diplomacy that I can carry with me for the rest of my career – and I look forward to more in the coming weeks.