When I started my internship at MUA, I knew that I was going to have a wider variety of tasks than I had performed at any of my previous internships. As a business major, I was drawn to the non-profit management side of this internship, including outreach, development, marketing, and digital media. At the same time, I wanted to utilize the internship to improve my Spanish fluency. Lastly, and perhaps most importantly, I was drawn to this internship because of the organization’s mission: to help low-income Latina women learn English, gain employable skills, and become leaders in their communities and in society at large.

Because I had so many interests coming into this internship, I was given an accordingly wide array of responsibilities for the summer, and have been given the opportunity to develop and utilize many different skills. On the business end of the internship, I have learned valuable lessons about the importance and difficulty of identifying and adequately reaching a target market. As in many nonprofits, this task is made even more difficult for MUA because there exist three distinct target markets to identify, analyze, and reach: the group of people MUA serves through its programming, the group of people to whom it wants to disseminate its message, and the group of people that fund its operations. These three groups have different habits and lifestyles, and we need to make sure that marketing and outreach messages reach them through the appropriate avenues. For example, even though one of my jobs this summer has been managing the Facebook page, the students that utilize MUA’s services do not tend to be active Facebook users. So why do we have a Facebook page? The answer is that we use social media to spread awareness about the mission of MUA, establish its reputation in the local community, and reach potential donors and volunteers. Accordingly, I must tailor the content on social media to those that I am trying to reach.

On the other end of my responsibilities this summer, the biggest challenge I have faced was teaching an English class. The extent of my prior teaching experience had been teaching children how to ice skate, so I felt out of scope teaching a classroom full of students twice my age how to speak English. The biggest skill I have learned though my teaching experience has been that of flexibility. Even with an extremely detailed lesson plan, it is inevitable that the lesson must change as it progresses: certain activities won’t work, students will need extra help with a certain concept, or an activity will go faster than expected. I’ve also greatly improved my confidence in my Spanish skills by teaching English to native Spanish speakers.

I will walk away from this internship with a great variety of new and improved skills. Although I don’t necessarily see teaching or non-profit work in my professional future, I have learned invaluable and widely-applicable lessons about target markets, the need to remain flexible, and the importance of confidence in both language skills and in tackling unfamiliar situations.

One of the biggest reasons that I decided to work at MUA is because I felt that it was important to try and make a tangible difference in helping combat wealth, education, and health disparities faced by the Hispanic population in this country. In our current political atmosphere, growing anti-immigrant sentiment has made living in the United States even more of a challenge for ethnic minorities. It is imperative that we take action to ensure that immigrants – especially woman immigrants, who face even more barriers to success – have the resources they need to thrive in the United States.

language skills to effect social, political, and liberating changes in their families, communities, and in society at large. This goal is no easy task, for various reasons. Poverty presents a significant barrier to success for many Latinas: one in four Latinas live below the poverty line, while more than half live near the poverty line. Furthermore, Latinas make 56 cents for every dollar earned by white males. They also have the least access to health care among any group of women and have the lowest high school graduation rate of all women.

So how does MUA help work toward a world without these significant gaps in success?  The answer lies in small steps. MUA’s focus is on helping Latinas learn English, which is a common prerequisite for employment – and more generally, for success – in the United States. Some women come to MUA with no reading or writing skills. These women first learn how to read and write in Spanish, and then progress to English classes. Following

basic literacy skills, MUA has various levels of English classes. It also has various job certification classes, to be taken in conjunction with or upon completion of English classes. These classes, along with social services such as daycare and affordable housing counseling, serve as stepping stones to allow the women who come here to gain employable skills, seek new career opportunities, and overall build better lives.

On a personal level, progress is seen in both subtle and clear ways. As students continue to take classes, their language skills increase, they become more comfortable in social situations that require them to speak English, and their confidence grows. On a national scale, progress is more easily measurable. The percentage of Latinas who have graduated high school from 2003 to 2013 grew by 14 percent. College degree attainment has been increasing by roughly 0.5 percent every year, and their representation in the fields of teaching, law, medicine, and management has grown by 30 to 40 percent in the last decade.

These changes are steps in the right direction, but there is still much work to be done. Latinas deserve equal opportunities to achieve success in the United States, and it is partially through organizations like MUA that they will eventually be able to. 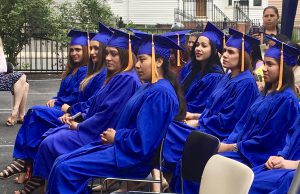 Latinos comprise the largest ethnic minority in the United States, consisting of sixteen percent of the overall United States population per the 2011 Census. Two-thirds of Latino children in the United States live in low-income households and roughly one-third live in poverty, according to a report by the National Research Center On Hispanic Children and Families. Among Latina women in the United States, only 65% have graduated from high school, and less than 15% hold college degrees. These statistics stem from a cycle of poverty and a lack of educational opportunities, exacerbated by a growing anti-immigrant sentiment within certain political factions of the United States.

“Women United Advancing,” MUA is a nonprofit that encourages Latina girls and women to seek educational and career opportunities and to grow into leadership roles within their community. Many of the students at MUA live in shelters in the Boston area, and many are victims of domestic abuse. MUA offers a variety of classes and social services, Spanish literacy classes, several levels of English, Hi-SET high school equivalency test readiness, computer literacy classes, and home nurse certification classes. MUA also has a daycare on site so that students, most of whom are mothers, can leave their children in safe hands while they attend classes.

I am responsible for several tasks and projects this summer. I have spent a significant portion of my internship thus far working on an outreach project, which includes formulating and updating a database of key industry contacts in order to establish partnerships with similar organizations and recruit new students. I have also been working on public relations and marketing tasks, such as monitoring and updating the MUA Facebook page (give it a  if you feel so inclined!), photographing MUA events, and sending press releases to local news organizations.

In addition to these projects, I will also be teaching a three-week introductory English crash-course starting in July, and have been preparing for that. My work this summer will help to further MUA’s mission by expanding MUA’s reach, both by working on the outreach project to recruit more students, by creating marketing and promotional materials in order to establish MUA’s presence and acclaim in the Boston non-profit community, and by teaching English.

By the end of the summer, I hope to have made a tangible difference in MUA’s reach and in helping students to learn English. It has been very humbling and inspiring to work at MUA thus far, and am looking forward to the rest of the summer.