My internship with Ashoka came to an end last week, and I’m already missing it! It’s hard to describe how grateful I am for the experience because it has meant so much to me in so many different ways: I got to see people helping each other altruistically and wholeheartedly; I gained so many insights regarding the field of nonprofit and social entrepreneurship; I learned how to communicate better and work productively; and I grew so much as a person. There are just too many things I can share, but in this blog, I want to focus on what my project and my work means to Ashoka.

The reason I want to talk about this particular topic is that, from the first sight, it doesn’t seem like my work has much to do with the impact Ashoka is making. In fact, I’ve also questioned the value of my work multiple times throughout the internship. However, in the end, I did see the significance of my project. I want to use this as an example to remind future interns to not get frustrated when you don’t see the meaning of your work at first.

As I mentioned in my first post, Ashoka is a global organization with offices in many countries. In Ashoka, collaboration between different offices is very common. For example, the Changemaker Companies (the department I worked in) often collaborates with the Paris office on developing and managing partnerships. However, since Ashoka is so big, people in different offices may not be familiar with each other’s work, so they often need to spend extra time at the beginning of each collaboration, which can slow down the progress of the actual project. That’s why many key departm­­­­ents of Ashoka all have their own space on this platform called Confluence, where people in other offices can learn about their work and download relevant resources. So, my project was to build such a space for the Changemaker Companies so that in the future, Ashokans from other offices could feel more knowledgeable about our work before collaborating with us.

Besides developing the Confluence space, my project al­­­­­­so involved rebuilding Changemaker Companies’ public and private SharePoint folder. Each department in Ashoka has its own SharePoint folder so that people in the same team could work on one deck together. People also kept all their past documents and decks in the folder. However, since everyone has access to edit the folder, Changemaker Companies’ SharePoint folder ended up being really messy and disorganized with a lot of overlapping and outdated documents. My job was to design a structure for the folder and reorganize all the documents so that it’s easier for people to locate materials. I also created a systematizing plan for tracking all the changes and updates made to the documents so that the administrator can better manage the folder in the future.

As you can probably tell, all of my work was internal-facing and none of it was associated with Ashoka’s external programs (the ones that are “actually” making impacts). However, no one can deny the significance of working on internal development, as it’s the backbone of every well-functioning organization. If all of Ashoka’s external programs and partnerships are the leaves of a tree, its internal development/management must be the trunk and branches.

In the field of non-profit/social justice–in fact, in every field–it’s impossible for everyone to work on the front line. We may only see the people on the front line and look up to them and think it’s glorious, but we must not forget the contribution of people working behind who deserve the same amount of respect and glory. Therefore, future interns, if you got assigned a task of a nature similar to mine, don’t complain or give it up right away. Take a moment to think about it; it might just be the trunk of any tree, the foundation of any impact. 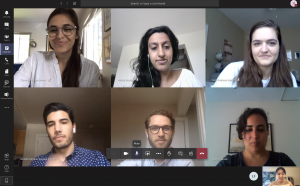