I’m so glad to have had the opportunity to work with United for a Fair Economy and to have been introduced the social justice and nonprofit worlds. I’d previously worked with many offices that did good for their communities, but I’d never been brought into a workplace that so strongly viewed itself as part of the communities for which it stood, and that provided a community in itself for staff. From my mentors at UFE, I learned everything from fundraising to communications to project planning, all through the lens of an inclusive nonprofit atmosphere. I also found it refreshing to work for an organization that focused so seriously on the wellbeing of staff. Everyone at UFE wants to form genuine relationships with each other — in fact, it’s pretty much required, as collaboration and understanding are at the core of all their projects.

I was lucky to try and have a small impact on every aspect of work at UFE. I’ve done database entry and a bit of research for our fundraising efforts, I’ve worked in Canva and done writing for communications, I’ve learned about social media and its place in nonprofit work, and that feels like just the tip of the iceberg. What I’m most proud of, though, is that I was able to pitch and build the framework for an entire long-term project on my own. Obviously, the project itself will be a surprise until UFE is done with it, but I had the opportunity to write a full-length project proposal on my own, to search for potential vendors and artists, and to feel like I’d really built something for the organization.

I wish I’d known before I started with UFE how free I’d get to feel throughout the internship. Everyone I worked with was concerned with my happiness and comfort as much as, if not more than, they were concerned with my output. The hours were extremely flexible, and I was consistently asked which parts of UFE work I’d like to explore more. This really stuck in my mind through the summer because I quickly realized how much higher the quality of my work was when there was that relationship of trust.

If I could give advice to anyone interested in working with United for a Fair Economy, it would just be to speak openly about your background in nonprofit and social justice work, and to be even more open about your interests and the things you hope to accomplish in those spheres. I think it goes this way for many internships, but it’s so much more important to be genuine about your experiences and honest about your curiosity than to project an image of the perfect undergraduate student. You don’t have to have years of experience organizing protests or running your own nonprofit to be the right fit for UFE. The most important thing is enthusiasm and a willingness to learn.

Overall, I’m so thankful for my internship with United for a Fair Economy and I’m excited for the next Brandeis student who might get to work with them. 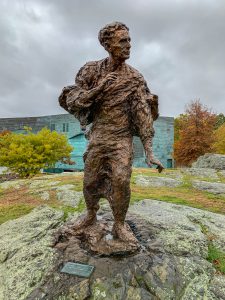 One of the most important aspects of Brandeis’s history is its focus on social justice. Not only did I learn how to be a better activist through student life at Brandeis, I also learned how to have more productive conversations about social justice with a broader variety of voices. There are many ways to achieve our goals in activism, and with a more intersectional mindset we can find paths that can accommodate and benefit everyone. The Brandeis attitude toward consistently having these conversations and being flexible with how we see the world was massively helpful as I became an intern at United for a Fair Economy (UFE). The organization is constantly finding new angles from which to look at different issues, and new ways to fight for what we believe in. Everyone on staff has a different background and different strategies for fighting for an equitable economy. Just like Brandeis, that’s one of the team’s greatest strengths.

Through the Economics and International and Global Studies departments at Brandeis, I’ve gained so much of the necessary theoretical and policy-based ideas I need to properly discuss the issues we work on at UFE. So much of what we do is a discussion of what changes we actually want to see occur, what those changes could realistically do for our communities, and how to work in such a way that those changes get made. Again, we have to think deeply and in an intersectional way about who is affected with every issue of policy change, and those questions go into everything as large as our full-scale projects and events and as little as what we decide to post to our Instagram story.

When we talk about how to work for a higher minimum wage in different states, we have to discuss the ways it will benefit the surrounding communities, who specifically it’ll benefit, what the math looks like, how to campaign to make it happen, etc. When we plan events like our Training of Trainers, we don’t just hold seminars on how we think people should do their activism better; we work within a popular education framework and give participants opportunities to express not just their pragmatic views of how to make change, but also how their own lives are affected and how they think of organizing.

We prioritize things like healing and language justice and even try to build small communities as we learn together. I think, ultimately, one of the most special parts of my experience with UFE has been seeing the way one can use the education they’ve already received, especially from traditional sources like a university, and utilize that while still learning and growing every day as part of a community. All the time, team members at UFE are coming up with a new lens through which to look at the world, and thinking about how to make it a better place for others.

This year, I’m the summer intern at United for a Fair Economy, a nonprofit organization which fights for a more equitable economy throughout the United States. I knew I wanted to work with UFE as soon as I read their application because of our shared core values and the way those values intermingle with my studies at Brandeis. As an Economics and International and Global Studies double major, I’m equally fascinated by the more quantitative/analytical side of economics and the real-world effects of all those mathematical formulas and theories.

At UFE, we study not just the existence of economic inequities, but also their origins and the practical ways to combat them. UFE began in 1994 under a different name, Share the Wealth. Since then, the organization has grown into a major source for change and has created and met so many goals. Divided into three main branches, UFE works on issues of popular education, responsible wealth, and building inclusive economies.

Under popular education, using healing justice and language justice tools, we host trainings and workshops for leaders of all different kinds of movements to reimagine the economy and how to change it. Those leaders are given all the knowledge and experience they need to go out and train others on topics of economic inequities. Popular education itself is actually an educational technique which far predates UFE, in which participants are all on level ground, sharing experiences and conversation rather than being taught by a single person left in charge. As UFE says, “With popular education, ordinary people define their own problems and apply the lessons of past political successes and failures to their own situation.”

Responsible Wealth is a network of individuals who fall in the top 5% of wealth and/or income in the U.S. and have a vested interest in solving the inequalities and the inequities of our economy, knowing that everyone suffers when our systems aren’t fair. Participants in Responsible Wealth work and speak up for things like progressive taxes and corporate accountability.

Inclusive Economies is a UFE project working in many states, but is largely focused on North Carolina and changing policy there to reflect a fair state-wide economy. Central to Inclusive Economies are Raising Wages NC and the Living Wage Network, and they highlight UFE’s methods for collaboration and community involvement when it comes to movement-building. 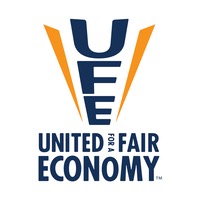 So far as the UFE intern, I’ve gotten to explore so many different fields under the amazing guidance of Sara Sargent and Richard Lindayen. I’ve learned about donor relations through the lens of database entry and gotten to work on communications projects in which I research data and history for outgoing media.

In terms of small steps that lead to bigger steps, and the idea of what change looks like, something I’ve learned very early at UFE is the value of the individual. Our full-time staff is only eight people, which is crazy when you think of just how much gets done at UFE every year. It’s very common to hear people say “the personal is political.” I think part of how UFE makes the enormous impact that it does is that it focuses on working with individuals as well as the collective. They’ve seen time and again that conversations and healing done between human beings is often what leads to changes in deeply-rooted inequalities and inequities.