From past experience, I have found that evaluating a summer internship after it ends can be as valuable as the work experience itself. Interning serves as a window into a potential career path, hones existing skills, and develops new talents. Often, however, it is only afterwards that one can fully assess the organization and the personal impact of the experience. As my time interning at the Coalition on Human Needs has now ended, I look back on my two months there quite positively. Not only was I given responsibility and able to play an active role in the small office, but my time at CHN also helped me grapple with potential career options.
I arrived in D.C. this summer with a number of goals: to write as much as possible; to see and understand the unique relationships among various policy issues; to absorb all possible information from both office interaction and city exploration; and to establish some meaningful relationships. I am confident that each of these goals has been met throughout my eight weeks at CHN. While the subject content of CHN’s weekly “Sequester Impact Report” is not drastically distinct week to week, finding and reading articles and subsequently writing summaries of them detailing the impact of the sequester gave me an opportunity to polish my writing. I also wrote an article for CHN’s newsletter, the Human Needs Report, on student loans, which was published on August 7 (http://www.chn.org/human_needs_report/student-loan-bill-enacted/). Throughout the summer I was given small projects that required both research and writing. For example, CHN’s website includes write-ups explaining each policy issue they work on. Some of these updates, unfortunately, are not up-to-date. I was able to update the health care reform section
(http://www.chn.org/issues/health-care-reform/).
At CHN’s bi-weekly coalition meetings, the overlap among policy issues is clear. Single issue-based member organizations are equally invested in issues other than their own, for issues in Congress bleed into one other. A representative’s vote on one piece of legislation may indicate his or her move on another seemingly unrelated issue. Focusing on my own independent reading – the New York Times, the Washington Post, Congressional Quarterly – has also been an invaluable way in which I have come to understand the interconnectedness of issues. I also made the most of my short time in the city by having conversations with CHN staff members, asking questions, and attending events outside of the office. For example, I attended a panel discussion on filibuster reform at the National Press Club. The panel of speakers – including Norm Ornstein – shared their opinions about whether Harry Reid should amend the Senate filibuster rule in response to Republicans’ blockage of President Obama’s seven executive nominees. Filibuster reform is not exactly a sexy issue for the general public, so most people are unaware of its implications. The panelists agreed that without filibuster reform, and therefore with important executive positions left unfilled, the Republicans will gain more power and gridlock will continue to plague the federal government.
But my internship has also exceeded my original expectations. Not only did I meet the goals I initially outlined, but I have also begun to define my future career path in more concrete terms. While interning at CHN, I realized I could see myself working in the nonprofit political advocacy world in Washington once I graduate. However, as I was immersed in this nonprofit world, I was also able to picture myself following the academic route, which is a wildly different environment, but could be a valuable path to take before entering the DC world.
Overall, I look back on my summer interning at CHN optimistically. And, I am confident that as I continue to reflect independently on my experience throughout the year it will become even more meaningful to me.

As my fourth week interning at the Coalition on Human Needs comes to an end, I am pleased to report that my summer in Washington, D.C. has been informative both inside and outside of the office.
While I am proud to see each week’s Sequester Impact Report that I have written posted on the CHN website, what I am most enthusiastic about is the active role I have played in the office. Each week, my supervisor, Danica, and I meet to touch base on the status of my assignments. We also discuss potential projects and ideas. Last week, Danica and I spoke about the possibility of creating a CHN Blog. In order to attract writers for the blog and to underline – and not undermine – the central mission of the coalition, however, we must creatively pinpoint a precise theme and purpose for the blog. Danica and I brainstormed possibilities and ultimately agreed that the blog should serve as a tool for individuals not involved directly in human needs advocacy to help the efforts of CHN. In order for the blog to appeal to this crowd, an informal writing style for the blog entries may be best. However, this more casual approach deviates from the standard formal writing style of the text that CHN publishes and disseminates. We plan to begin working on the blog once Debbie Weinstein, the Executive Director of CHN, approves the proposal Danica is now working on. I am eager to begin the CHN Blog project, but I am excited also about the process through which we defined the potential blog’s purpose. Rather than Danica’s telling me what the blog would entail, she involved me in the decision process.
It is through brainstorming and interaction that I have learned the most during my time at CHN. While I understood the fundamental objectives and basic infrastructure of CHN when I began my internship in June, it was not until I spoke with staff members directly that I fully recognized the fluidity of the office’s day-to-day nature. While each staff member has a distinct title, collaboration is essential in their work. After speaking separately with both Richelle Friedman, the Director of Public Policy, and Angie Evans, the Director of Outreach and Field Activity (http://www.chn.org/about-chn/contact/), the overlap in the staff members’ responsibilities became more visible to me.
While a considerable amount of my learning has stemmed from direct interaction with the CHN staff, another portion has been independent. When I compile articles for the weekly Sequester Impact Reports (http://www.chn.org/wp-content/uploads/2013/07/SequesterImpacts7-13-7-19.pdf), I am able to do a lot of reading. Of course, I read the articles relating to sequestration cuts, but I also read articles tangentially related to the cuts and on the current hot policy issues. Not only have I learned more about the policy issues (immigration, food and nutrition, minimum wage), but I have been able to see the unique overlap of these issues that makes the collaboration of the coalition’s member organizations so natural.
I am also doing a lot of writing, which was one of my main priorities when outlining my goals for the summer. I believe that the most important way to improve one’s writing is to write, for practice makes writing more succinct and natural. My long term project is to write an article about student loans for the Human Needs Report, CHN’s newsletter, which will be published on July 22. Because my work involves interaction with staff members and writing, I am honing my communicative and writing skills considerably.
It is difficult to monitor my growth quantitatively, but I do know for sure that I am learning. I feel that the world of non-profit advocacy has become clearer for me. In addition, I am coming to see both the basic and complex connections among policy issues.

The Coalition on Human Needs (CHN) is a network of organizations sharing a similar mission: to help low-income people by advocating for human needs programs in Congress. CHN, focusing on a range of policy issues including health care, immigration, nutrition and education, facilitates the collaboration of its member organizations in two primary ways. First, CHN hosts a bi-weekly coalition meeting, the Friday Advocates’ Meeting, for representatives of the network’s member organizations. At these meetings, attendees summarize the current development of policy issues and build consensus on these issues. Second, CHN disseminates information to its member organizations and the general public through its website (http://www.chn.org/) and by emailing its network of over 60 thousand individuals across the nation. For example, its newsletter, the Human Needs Report, published every other Friday while Congress is in session, discusses national policy issues affecting the low-income population. The office is small, with a full-time staff of four women in addition to a seasonal consultant and me as the sole intern. CHN is located at 1120 Connecticut Avenue in Washington D.C. (a sixteen minute walk from where I am living!).

After only only four days, I am looking forward to the responsibility that will be delegated to me in this internship.  Each week, CHN publishes a Sequestration Impact Report, which highlights some specific effects that the sequestration cuts have had on certain cities and states. 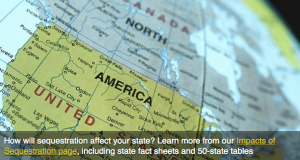 I wrote this week’s Sequestration Impact Report (http://www.chn.org/wp-content/uploads/2013/06/Sequester-Impact-June-8dw2-Autosaved.pdf), which required compiling articles detailing the sequestration’s impact and writing short summaries of the stories. After Deborah Weinstein, the Executive Director of CHN, edited my report, it was published on the website, which was exciting. Many of the member organizations use the reports, and it’s very fulfilling to know that I contributed to this publication. On Thursday, I had lunch with my boss, CHN’s Communications Manager, Danica Johnson. The lunch was mostly designed to get to know each other, but we also set up a meeting for early next week to further discuss my internship goals and expectations.

As of now, I know I will be able to voice the specific area of work (either field work, lobbying, communications) and the policy issues that I would like to focus on. Danica also told me that if I’m interested in writing, I could potentially write an article for the Human Needs Report, which would require researching a policy issue (this is something I am eager to do!).

After just a week into my internship, I am confident that I will learn a great deal this summer. Because CHN is concerned with several policy areas, I will not only become well versed in each issue, but I will be able to see their unique overlap and mutual dependencies. In addition, I will observe the strategies that CHN uses to build agreement within its network on how to take action. I will also witness the sensitive and careful approach CHN must take when drafting its articles so as not to offend or infringe upon the missions of any of its many member organizations.

Last summer, I worked as an intern at the Food Research and Action Center (FRAC) in Washington, D.C., which crystallized my goal to establish my career in non-profit work. Throughout this academic year, I evaluated several organizations whose missions emphasized social action through political advocacy. Whereas FRAC was narrowly focused on the issue of hunger, CHN’s broader policy agenda has a greater appeal to me. Before being offered the internship, I was interviewed by Danica Johnson, CHN’s communications manager, who contacted my references and consulted with the CHN staff. I accepted her offer and geared up for a great summer!