One of the main goals I had for my summer internship experience was to enhance my communication skills. I was able to achieve this goal while evolving as a professional in ways that I could not anticipate before my internship began. When I originally set this goal, I assumed I would meet it by engaging with folks one on one to discuss NARAL’s work. I absolutely did communicate with people in this way, especially at events where NARAL hosted a table, such as the Boston Pride Parade and Suffolk University’s Menstrual Health Conference. Overtime, I did become more confident in representing the organization and its mission by talking to people individually and in smaller groups. However, another way in which I was able to bolster my communications skills was through my work as a member of the NARAL staff and intern team.

As I mentioned in my last blog post, my supervisor left the organization a few weeks after my internship started, which proved to be a difficult transition for my fellow interns and me.  I expressed concern about the transition to my interim supervisor and engaged in an honest dialogue about the environment that resulted from my initial supervisor’s departure. This conversation was a turning point for me, in both a professional and personal way, as I embraced the opportunity to advocate for myself and express my honest sentiments in a constructive manner.

In the past, I have had difficulty expressing or advocating for my needs, as it is more my nature to please others and shy away from disrupting the flow. However, I realized that if I did not advocate for myself in this situation, my internship experience would suffer. I had a positive dialogue with my temporary supervisor during our initial conversation, which resulted in her understanding and action.  My temporary supervisor enacted immediate changes and was sure to check-in with me periodically to keep the communication lines open and honest. This entire experience proved to be extremely rewarding since I stepped out of my comfort zone and went out on a limb to advocate for myself. I found my voice in a way that I did not know existed. Despite the brief period of disruption, this experience was valuable to my personal and professional growth.

For any students interested in interning with NARAL or another organization in the field of health care advocacy, I would advise them to ask as many questions as possible. The realm of politics and health care policy is filled with nuances and an overwhelming amount of information. The best way to become familiar with all of this information is by continuing to learn and ask questions. The staff members at NARAL have always happily answered my questions and have taken the time to thoroughly explain policies to me. The staff’s openness to inquiries contributes to the positive atmosphere of the office, which is something that I really appreciated about this internship.

(NARAL is currently looking to hire a graphic design intern, and put this image out!) 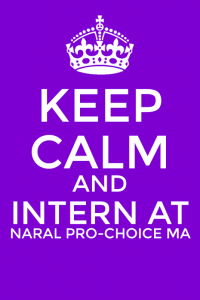 Overall, this was a fantastic summer, and I am so grateful to the WOW program for allowing me to have this experience.

Here is a picture of another NARAL intern dropping off petitions at the State House. 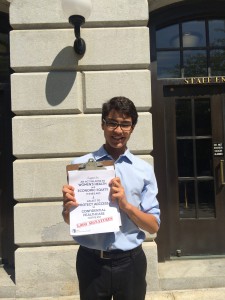 For more on recent legislative hearings that included NARAL bills, check out this article!

For more on the Joint Committee that heard our NARAL bill, look at this government site:

The work environment that I am in has proved to be fluid, fast-paced, and unpredictable. About two weeks ago, my supervisor notified my intern cohort that she would be leaving our organization to take on a new position elsewhere. Wow! Her departure was certainly unexpected and shocking. Another employee in the office is now overseeing my internship program, which has been somewhat of a difficult transition so far. While I am still enjoying my internship, it has been challenging to get used to the different leadership style of my new boss. However, I think that once the entire office gets acclimated to having one less employee, everything will smooth back out. The work environment has also proven to be fast-paced given the nature of the state legislature. Our office is always on its toes since we have to react quickly to the new bills, vetoes, and other actions carried out by the legislature. The most recent example of this occurred this past Tuesday, when Governor Baker made a line item veto to the new state budget plan in which he cut $600,000 for family planning. Our organization had to respond immediately to this upsetting news, which meant shifting our priorities at the last minute. Instead of focusing on creating testimony for our next legislative hearing, we had to strategize a mini-campaign to respond to the Governor’s disconcerting actions. Despite the stress that comes along with the nature of politics, I find the fast pace to also be really exciting.

The most exciting part of my summer so far occurred this past week, when I had the opportunity to testify in front of the Joint Committee on Financial Services in the state house for one of NARAL’s bills regarding confidential health care. I read an anonymous personal story that was submitted to NARAL that related to the bill that was being heard before the legislature. This is a picture of me testifying before the legislature. 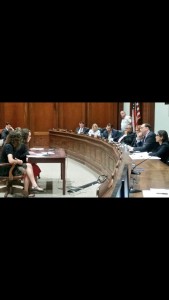 This next picture was taken the same day, but at a separate hearing for pay equity and pregnant workers’ equity. 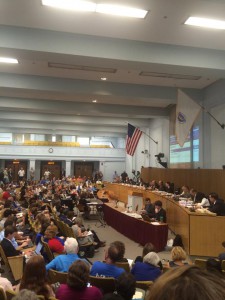 You can also find information on the bills that were heard with these links.

Life in the working world comes with a lot of freedom and responsibility that I do not have in university life. I like being in the city, where there is a lot of excitement and movement, as opposed to the sheltered atmosphere of campus. I have also come to value the feeling of returning home after a day at the office and having no more work to do. During the academic year, I always feel as if there is more work to be done. I think that the physical separation from the office to my house back in Waltham also creates a psychological barrier between work and free time. On the other hand, constantly being on campus makes it harder to separate the two.

This internship experience has forced me to adapt to change, which is something I have always struggled with. The skills that I am building as a result of the transition in my office, which are hard to put a name on in the moment, will definitely come in useful in the future. I am learning to be more flexible and patient when facing situations that are not ideal. I am also learning how to advocate for my needs, as I have had the opportunity to express to my new boss how this transition has affected me personally. I think that this summer has been transformative to say the least, and I am looking forward to returning back to campus this fall with the new skills I have developed from this internship.

Directly behind me, Chelsea’s typing furiously while Celia makes her twentieth call of the day, informing a State Representative that we have decided to endorse her 2014 campaign. Our office, decked with colorful pro-choice pins, posters, and other memorabilia, provides a welcome contrast to the gray sky and browns and beiges of the modest Boston skyline outside my window.

I’m spending my summer working at NARAL Pro-Choice Massachusetts as their Intern Coordinator. NARAL is the political arm of the pro-choice movement and works to secure women’s right to abortion, birth control, emergency contraception, health pregnancies, and healthy relationships. Massachusetts is one of NARAL’s 20 state affiliates, located at 15 Court Street in the heart of Downtown Crossing, on the ninth floor of a building that houses an assortment of advocacy, legal, and professional offices. I interned for NARAL Pro-Choice New York last summer, and though I’ve lived in three cities in the past three semesters – New York in the summer, Boston in the fall, and Washington DC in the spring – I’ve stayed involved with NARAL throughout the year. When I explained to my supervisor, Chelsea, in January that I would be living in Boston this summer, we worked together to craft an internship that would expand upon my leadership abilities and desire to create innovative campaigns that would propel the political landscape of Massachusetts in a pro-choice direction.

Five months later I’m bunkered down in NARAL’s office, with two weeks to prepare for the summer ahead. Our ten political interns arrive on June 3, and before that date I have an incredible amount to do. In addition to composing their intern manual, planning a two-hour political organizing training, and scheduling one-on-one meetings with each intern prior to their arrival, I’ve also recently been assigned my first advocacy campaign. The Women’s Health Protection Act is federal bill that would codify Roe v. Wade the Supreme Court case that secured a woman’s right to choose, in all state law, and pre-emptively void any anti-choice legislation that would impede a woman’s right to access safe, legal reproductive healthcare. All but two members of the Massachusetts congressional delegation have co-sponsored this bill, which means that the two remaining Representatives – Richard Neal and Stephen Lynch – will be hearing from my interns and me in the coming weeks.

I, alongside my supervisor and NARAL’s Political Director, will be planning a campaign from the grassroots up – everything from collecting petition signatures from Constituents, creating social media graphics and one-liners, and directly lobbying members of the Massachusetts Legislature and federal legislature to urge Lynch and Neal to support the bill. It is precisely the sort of substantive, adrenaline-inducing work I’ve been hoping for.

It’s clear one week in that I still have a great deal to learn about the political organizing process. A great deal of organizing and lobbying at the organizational level entails building strong, reciprocal relationships with other organizations and professionals that can assist you in achieving your policy goals. As a rising college senior, my Boston rolodex is embarrassingly small, and I plan to spend my summer scheduling informational interviews with likeminded professionals in the reproductive justice sphere. I also plan to learn quite a bit about time management and leadership in light of my responsibility to hire, schedule, and directly supervise ten political interns, many of whom are my age or older. I hope to make this experience as gratifying, substantive, and inspiring as possible for my interns so that they feel like they are genuinely contributing to our movement.

Since I have two weeks until the interns arrive, I’ve had the excellent opportunity to get to better know the NARAL Staff. There are only four full-time staff members here – Megan, the Executive Director; Erica, the Finance Director; Chelsea, the Health Equity Organizer; and Celia, the Policy Director – and I’ve been pleasantly surprised by the intimacy and acceptance of the office atmosphere. I am treated with respect and assigned substantive, important projects; I am privy to conversations regarding NARAL’s organizational structure, finances, and future campaigns; and, most importantly, I’m treated like a member of the team, an equal fighting for this cause we all so staunchly support.

My friends have warned me that this may be my “honeymoon” phase, and a few weeks into my internship I’ll be dreading the 9-5 grind – but somehow, I don’t think so. There is never, ever a dull moment in this office, and given my passion and visceral support for this cause, I bet I’ll be just as excited about my internship on the day I leave.