This summer, I am a Marketing Intern at the Griffin Museum of Photography in Winchester, MA. In this position, I am part of a team responsible for creating engagement strategies as well as audiovisual and graphic content to promote the museum’s programs and exhibitions on various social media platforms. As a multimedia geek with a profound interest for photography and the visual arts, my goal is to generate genuine interest in artists, cultural organizations, and their work.

After working as a Multimedia Support Specialist and Production Assistant at Brandeis’ media lab (Sound and Image Media Studios), I am employing many of the creative and technical skills I acquired at Brandeis in a professional creative environment. Working as an all-in-one video editor, sound producer, and motion graphics designer, I am having the opportunity to merge my multimedia and marketing skills to help bridge the digital gap between cultural enterprises, their work, and the general public. I believe that by taking advantage of the possibilities digital media has to offer, museums can reach new audiences and expand the reach of their cultural impact by presenting their work through a different lens.

Two of the projects that I most enjoyed working on this summer were two artist statements that I transformed into promotional videos for the ongoing exhibitions at the main gallery: At the Edge of the Fens by Jacqueline Walters and Now is Always by Vaune Trachtman. For this task, I had to get in touch with the artists, have them record a voiceover of their artist statements, and come up with a creative interpretation of their exhibitions using a limited set of photographs. Most of my work is done with different Adobe Creative Cloud products that I practiced at SIMS in our many staff trainings, team and personal projects. I create graphics in Photoshop and Illustrator, which then I animate on After Effects and assemble together on Adobe PremierePro. I have also been exploring Adobe Dimension to add a 3D element to my design practice, as well as Adobe Audition and LogicPro to compose my own music as an alternative to using royalty-free sounds off the internet. I like my multimedia work to have a character of its own. I hope that by delivering eye-catching multimedia work while remaining honest to the artists and organization voice and missions, I can help strengthen bonds with their target consumers and expand the scope of their audiences.

Throughout the course of this internship I want to keep improving my multimedia and design skills. Thanks to the Steven M. Bunson ’82 Internship Fund in the Arts, I have had the opportunity to get a glimpse of what it is like to work in a fast-paced creative environment where deadlines are tight and content needs to be created on a daily basis. Although most of my work focuses on advertising and multimedia production, I would like to learn more about administrative tasks, such as programming and exhibitions.  I would also like to dive deeper into the museum’s archives and get a glimpse of what working as an art curator feels like. I am grateful to be doing an internship that allows me to be creative and get inspired by other artists on a daily basis. It is something that inspires me not only to be more knowledgeable of the current trends in the world of photography and the visual arts, but it also inspires me to pursue something that I am very passionate about. The Griffin Museum summer internship program has been incredibly beneficial as it is allowing me to prepare for my upcoming curatorial internship at the Rose Art Museum next academic year – something I wouldn’t have been able to do without the help of World of Work and the Hiatt Career Center.

In my time so far this summer at Fiege Films, I’ve had the opportunity to really get a good sense of what working on a team is like. I’m instinctively independent, and I usually like to work on my own, so working here has definitely been a bit of an adjustment compared to how I usually get things done when I’m at school.

Collaborating with a team on a creative project is something that’s relatively new to me, but I’m finding that it’s a really rewarding experience. Because it’s a team, we each have the opportunity to ask for input and get feedback. I think that having the immediate ability to get other people’s opinions on things makes the overall work stronger.

In terms of technical skills, I’ve learned a lot more about video editing than I thought I would. Working on a project in which I assembled choice segments from hours of interview footage, I was able to get frequent feedback on the artistic direction of the project, but also learned and developed a lot on the technical side. Using programs like Final Cut Pro X, Adobe Premiere, and Adobe Media Encoder day-to-day, I think I’ve gained a lot more technical skills that I’m eager to keep working on when I get back to school.

I’ve really been enjoying my time so far at Fiege Films, and the office environment reflects where I would want to work in the future. I like the balance between independence and collaboration, the fact that I’m given plenty of free reign and leeway on assignments, but there’s still always the opportunity to ask for clarification or for help if things aren’t working quite how they should.

In researching the Gulf Coast, I’ve also been able to develop my investigatory and analysis skills, which I’m sure will be handy when research papers start to roll in.

I’m learning different search strategies, and how to dig deeper if at first I can’t seem to find what I’m looking for. For example, in researching the petrochemical complex around Mossville, Louisiana, I was able to dig deep into the Calcasieu Parish tax records to find exactly how much of the surrounding land was owned by oil and chemical companies. And, after a little research, it shocked me. 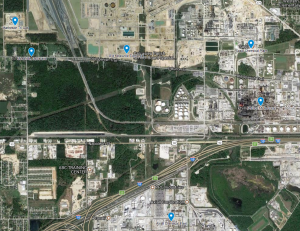 This chart, put together by The Intercept, further elaborates on how research can illustrate a historic culture of exploitation: I think this summer has been so rewarding because the purpose of all of this editing and research and development has been for something that I firmly believe in.

Even though doing research work can take a long time, it really doesn’t feel cumbersome or boring—I think it’s because of why I’m doing it. Because I get to be part of a team that’s passionate about fighting for social justice for threatened communities like Mossville, because I’m personally invested in the mission, this experience has been very rich and rewarding, and it’s been going by really fast.

For the future, I think this means that I’m on the right path, career-wise. I’m glad I’m studying film, because this internship has confirmed for me that it’s a great and effective way to tell stories that matter. And I think that’s why this summer has been so great for me, because I get to work creatively with a great team to help further a cause I care about.